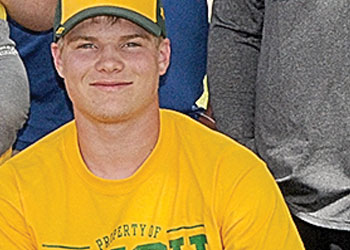 A graduating Lovell High School senior will extend his playing days on the gridiron after signing a letter of intent to play football at Black Hills State University.

Hunter Harris, a Class 2A All-State selection last fall, signed his letter of intent during a ceremony at his home Monday afternoon. He is the son of Keith and Julie Harris.

Keith Harris said it’s been a rough road for Hunter, noting that the COVID-19 pandemic put the brakes on talks Hunter was having with schools, and Black Hills State also changed coaches following the 2019 season. He said when Hunter was able to talk new head coach Josh Breske, everything opened up again.

Hunter thanked the many people in attendance Monday including his family, friends and LHS coaches. He said once he started communicating with Breske in earnest, everything fell into place.

“I re-opened contact and sent emails and made phone calls,” Harris said. “I was being persistent, and he said he admired that.”

Harris starred at linebacker and running back for the Bulldogs, playing both fullback and halfback. He said where he plays at Black Hills State will depend on what coaches see when he gets to camp later this summer. Practice for the Yellow Jackets is scheduled to begin August 10.

“The coach said he saw what he liked from me on both sides of the ball,” Harris noted, adding that he is already getting going on a summer weightlifting program at Club Dauntless.

Harris said he plans to major in exercise science at BHSU with a goal of becoming a physical therapist.

Lovell head football coach Nicc Crosby said the first thing that comes to mind when he thinks about Harris is his work ethic.

“It’s hard to find someone more passionate about working than Hunter whether it’s in a game, a practice, in the weight room or in the off season,” Crosby said. “He has one speed, and that’s full speed. As one of only six seniors on the team, his leadership was exceptional. All of the seniors stepped up, and Hunter, in particular, did a great job mentoring the underclassmen. He was very encouraging to his teammates.

“He’s a good example of getting things done in the classroom and on the field. He’s mature and a good communicator. That helps him understand coaches’ expectations and communicate them to others. He’s definitely assertive. He doesn’t wait for things to happen. He makes things happen.”

Crosby recalled a game in Pinedale late last season, a game the Bulldogs had to have with a playoff berth in the balance. Harris broke tackles and executed spin moves during a long run that Crosby recalls was a back-breaker for the Pinedale team.