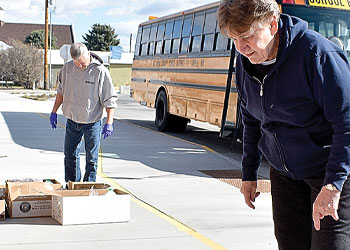 Before the pandemic, Michael Montanez was the events driver, transporting local sports teams and school clubs across the state.

After the pandemic, paved highways have been replaced with dirt roads. He’s on the same task every bus driver in the Big Horn No. 2 fleet is on, delivering meals to nearly every child in the district.

Across all the buses, 1,100 meals are delivered per day, with 3,200 meals sent out on Fridays so that supplies can last the weekend.

It’s an undertaking Big Horn District No. 2 has never seen the likes of before.

“This might be the only food that they get,” Lauren Shumway said. Before the pandemic, she accompanied the middle school and high school choir. Now she helps deliver food every morning to local families, along with helping students sign up for classes in the next school year.

“We do have kids who really need that good food every single day,” she said.  “It definitely helps that we’re able to give them that breakfast and lunch that we need.”

The program worked out is simple. Every participating family simply sets out a cooler in front
of their residence, and Monday through Friday, meals, along with snacks and even cartons of milk are dropped off.

The program is open to every child under 18 within the district, and meal service director Rosanna Rusch said the effort has been a substantial undertaking for her crew.

While school was in session, Rusch said the district served roughly 700 meals a day. In the initial weeks, after school was shut down, the district would gather prepared meals at local parks for families to pick up. Rusch said that effort increased the load to 385 breakfasts being served a day and 446 lunches.

And then, with students in more remote locations unable to easily access the pick-up location, the district enacted a delivery service and that number increased again. Currently, her staff is preparing 518 breakfasts and 569 lunches.

The work hours for her food staff have doubled, Rusch said.

“It’s a huge effort on a lot of people’s part to make it work out,” Rusch said.

The most difficult part has been the supply chain, Rusch said. As demand for meals has increased, the food available has decreased.

“We never know what we’re getting,” Rusch said. “I usually spend hours (the night I place a delivery) with my SYSCO rep going over any option that we can substitute to make everything work.”

At first, the district went in the direction of preparing sandwiches, but those ingredients became harder to come by, Rusch said. Now, the district is creating frozen meals district kids can prepare themselves, mac and cheese, waffles,  corn dogs.

It’s a three-week meal rotation, so students still receive variety. The chef’s salad has been a surprising favorite during this time, Rusch said. Fresh vegetables and fruits are also delivered every day.

“One thing we’ve tried to do is bake a roll for every kid, every day,” Rusch said. “We want to give them that taste of home cooking.”

Marya Snell has worked 10 years in the district as a full-time lunch lady. The last several weeks are unlike anything she’s seen.

“Everything has changed,” Snell said. “We’re getting through it, though. It doesn’t take us too long to get a system to get things organized.”

Snell comes in every day around 6:30 in the morning, and begins to make lunches for the day. The first delivery organized is for Byron and Cowley, who get breakfast and lunch delivered for breakfast times. After that, she prepares meals to be picked up at the parks. And then,  after preparing meals for students in Lovell for lunch delivery, she begins lunch for the next day.

Nancy Cerroni said, as an interim superintendent, food service workers in the district have been among the most inspiring.

Shumway said a large part of what has kept the program so easily moving forward is the enthusiastic attitude the food service workers bring with them every day.

“They are just fun and awesome,” Shumway said. “Their spirits are always so high.”

Rusch said she knows what keeps her going.

“I miss our kids, We know them all by name.”  Rusch said.  “Every once in a while, a parent comes with kids in the vehicle and we’re waving like crazy. I’m sure if someone took a photo of that, I’d be there waving like crazy, too.”