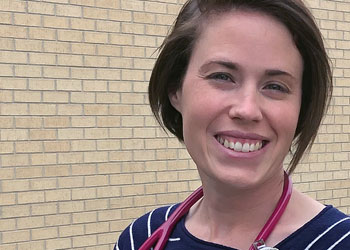 Wagner started out helping as a nurse at New Horizons Care Center in early April and officially started seeing patients this week.

“Working at the care center was a good opportunity to get my feet wet and to familiarize myself with the patients there,” said Wagner.

Wagner was born and raised in Casper. She moved briefly to Billings with her husband when she was in her early 20s but moved to New Mexico shortly after, living in Las Cruces, which is in the southern part of the state, near the Mexican border. While in Las Cruces (about the size of Casper), she obtained her Bachelor of Science degree in nursing at the state university located there.

Wagner spent more than six years working in pediatrics and the neo-natal care unit as a nurse before earning her Master of Science degree in nursing from the University of Colorado Colorado Springs.

She and her husband have been married for 11 years and have five children ages, 2 to 16, who are currently students of Lovell schools, studying from home like other Lovell students. She said she has heard “great things” about the school district and is excited to have her children attend school in Lovell.

The family has settled in Lovell, also in part, so that Wagner can make herself available to help with some of the emergency services at the hospital.

“I thought it would be a good idea to be in close proximity to the hospital so I could help out with emergency services there,” she said.

She said the adjustment to the area has been relatively easy since her husband, Dustin, is from Frannie. Dustin’s parents live in Frannie. His grandparents are from Deaver.

Ali’s mother has moved to Lovell, as well, from Las Cruces.

“I’m very close to my mother, so she moved with us,” explained Wagner. “She is originally from Sheridan, so she’s happy here.”

Wagner said she is happy with the family’s decision to move to Lovell.

“It’s been wonderful to slow things down,” she said. “Everybody has been so kind and welcoming to us. We’ve already met all of our neighbors and interacted with them, and all of that has been extremely positive. Working at the care center was great. It gave me the opportunity to meet the residents and to know who their families are and to get to know the staff and nurses there. And then everyone at the clinic has also been so welcoming and encouraging.”

Wagner has been working closely with Kelly Kolar at the clinic, which she said has been a tremendous help.

“This is my first experience as a nurse practitioner, but I was a pediatrics nurse at the NICU (Neonatal Intensive Care Unit) for six years,” she said. “We basically managed a lot of our patients there on our own, working with the providers over the phone, so I’m used to a lot of autonomy. So, taking a step in this direction has been a gentle one.”

Wagner feels her strongest suit is working with babies and kids, including teens.

“I’ve had a lot of experience working with that population, and I have a lot of knowledge to bring to the table here,” she said. “I’m hoping we can do more with pediatric patients here at our hospital instead of sending them to Billings. I’d like to see more emphasis on care here, because nobody likes to be away from home.”

This is also Wagner’s first experience working in a critical access hospital in a rural area. In fact, this is one of the least populated areas she’s lived in. She said she likes to be open-minded and tries to make time to listen to her patients as much as possible.

Wagner and her family enjoy outdoor activities, and she looks forward to exploring the area on her days off.

“One of the big reasons we moved out here was to be able to do a lot of things we couldn’t do in New Mexico,” said Wagner. “My husband does a lot of gardening. I grew up hunting, fishing and doing a lot of archery. I’d like to get back to that and to teach my kids how to shoot. We also like to camp and hike.”