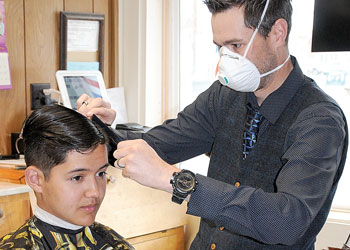 The population of North Big Horn County will soon look fit and well groomed as, after six weeks of closure due to the COVID-19 crisis, personal care service businesses and gyms were allowed to open on May 1 due to a slight relaxation of restrictions under a new order issued last week by Gov. Mark Gordon.

Most hair salons and Lovell’s barbershop opened for grateful customers Friday, and the Club Dauntless gyms in Lovell, Powell and Greybull opened Monday.

All of the personal care services have been working with state rules governing how they can operate to keep clients safe, with a focus on cleanliness and cleanliness.

All of the shutdowns for gyms and personal care services were initiated by the state on the week of March 16, with Gov. Gordon and state health officer Dr. Alexia Harrist issuing an order on March 19 for the immediate closure of such businesses. The original order was effective through April 3, and the closure was extended through April 17, then April 30.

But now the reins have been loosened a bit – with restrictions.

Club Dauntless co-owner Stacy Bair said she originally shut the gym to customers on March 18, anticipating the state order to come on March 19, so the gym has been closed for nearly seven weeks.

With no income, Bair was successful in securing a Payroll Protection Program loan, and with two of the three gyms having been open only a few months, she put staff members to work cleaning and refining operating processes, plus tidying up loose ends from recent construction. But the company was hit hard by the shutdown.

“One hundred percent of our revenue was turned off in a heartbeat,” she said. “We had incredible momentum (before the shutdown) with everybody getting into fitness. It (shutting down) is never a good thing, but it couldn’t have been any worse (for timing).”

After getting the word last week, the Club Dauntless crew went to work preparing to open Monday. All of the memberships had been frozen on March 18, and no money is due until a fob is swiped by a member to resume workouts. At that point a membership account opens again.

“It’s opt in rather than opt out,” Bair.

Bair said she is very pleased to be open again.

“Obviously, it scares me to death, but there are a whole range of things people can die from or get sick from that can be mitigated by exercise. If our gyms weren’t so big I wouldn’t have done it,” she said, noting that the main workout rooms in Powell and Lovell are around 6,000 square feet, and the workout room in Greybull is 4,000 square feet.

In a message to customers/members on Facebook Sunday, Bair pointed out that it is still extremely important for everyone to be careful and follow the rules.

“Our health officials have opened gyms in Wyoming, but that is not because there is not a threat of COVID,” she said. “It’s being done to avoid economic collapse and help keep intact our mental and general health outside COVID. We expect you to take these rules seriously. We know you will, which is why we feel comfortable providing the opportunity to be back in the gym if you choose.”

The two most important rules for the gym have to do with cleaning and social distancing, Bair said. All workouts must be individual in nature, she said, and even if customers enter with a spouse or family members, they most stay a minimum of six feet apart at all times because staff members can’t be expected to recognize family ties. And under state rules, those lifting weights cannot use a spotter.

As for cleanliness, there used to be bottles of cleaner distributed around the main room, but they could be used and touched by others. Now, a customer will pick up a spray bottle from a shelf and keep that bottle with them while using the machines. Customers must clean “everything you touch before you touch it and after you touch it,” Bair said. Bottles are then placed
in a bin from which staff members will retrieve the used bottle and disinfect the bottle and the spray handle, then return the bottle for use.

There is a limit to the number of users in a room at any one time, and staff members will be monitoring the numbers, asking customers to hang on when a room is full, staying outside or waiting in one of the studio rooms. It would be ideal, she said, if people with time flexibility are able to avoid the crunch times in the early morning and in the evening to come during the day. Customers are also asked to be efficient with their time, do their workouts and then exit the building so others can take their turn.

“So far it has worked organically,” she said. “People are spacing themselves and following the rules. We really are blessed in this community. Everybody knows everybody. There are just a few people in here all the time, and they know each other and want to protect each other.

“I have definitely been less nervous watching it happen rather than wondering how it would be.”

Some machines have been taken out of use and are marked with caution tape because they cannot be moved six feet away from the next machine, and the rule to clean before and after each use has led to the end of traditional circuit training where users move from machine to
machine to machine in a relatively rapid sequence. Those doing stretching or body weight workouts are asked to use a studio room.

Tanning is available, and massage will again be offered, but open lockers in the restrooms are unavailable for use, those customers still have access
to rented lockers. The “quick lockers” in the lobby are still available for use. Showers are no longer in use.

No guest passes are being issued, and no one under the age of 16 is allowed in the gym “for the next little bit for the safety of everyone,” Bair said in her video.

No group classes are being held at this time, but Bair said she is working with health officials to figure a way to hold small group classes.

Since the rules require virtually everything to be disinfected, the club has had to remove items like mats, bands, Bosu balls, medicine balls and the like. She added, “We go through the facility twice a day and sterilize everything.”

Wheeler said he closed on March 20th and, like Club Dauntless, had no customers for more than six weeks. When businesses resumed Friday, it resumed with a whirlwind. Wheeler gave 43 haircuts Friday, 34 Tuesday and in the 30-plus range Monday and Tuesday. He said he worked 15 hours Friday and 12 hours each Saturday, Monday and Tuesday.

While Wheeler had plenty of yard and home projects to keep him busy, he was also paying attention to when he might be able to reopen.

“My wife (Tammy) was really keeping track of it,” he said.

Customers will notice that all magazines and books have been removed from the waiting area because they cannot be disinfected, and he put in a TV to keep customers entertained.

Wheeler is constantly cleaning the chair and disinfecting tools throughout the day.

State rules allow barbershops to allow only one customer inside the building at a time, though a guardian can be inside with a child, and cuts are done by appointment only, with no walk-in customers allowed, so Wheeler placed a bench for waiting just outside the shop. He said Lovell Building Center gave him a discounted price since he had been shut down for weeks, which he appreciated.

“Everybody has been real kind and generous in that way,” he said.

If an adult is waiting for a child’s cut to be completed, he or she is asked to wear a protective mask while waiting. Wheeler himself is wearing an N95 mask, though he is not requiring customers to wear a mask during the haircut since it’s very difficult to cut around a mask and straps.

And while with cutting hair it’s impossible to make up for lost business in terms of actual appointments, some customers have been tipping extra, he said.

Wheeler said he was anticipating opening announcements in April, and he is expecting another announcement for businesses on May 15.

“I’m hoping to get rid of this mask. It’s taking a toll,” he said, showing the lines carved into his face by the tight-fitting mask.

“I’m excited to be back open,” Wheeler summed up. “I miss the people, the clients. I miss interacting with everyone and visiting.”

Most local hair salons and spas opened Friday, though Lisa Gilbert will re-open We Got the Look next Tuesday.

Cindy Allred of Maneline Hair and Nail Design said stylists were not allowed to do anything during the shutdown, which lasted from March 25 through April 30.

“We just shut her down for five weeks,” she said.

Rules announced last week allow up to 10 people in a salon at a time, customers and stylists combined, but no kids. So, for instance, there could be four stylists and four customers, plus one customer waiting.

“A lot of people wait out in their car until people get done,” she said.

Maneline is open Monday through Friday from 9 a.m. to 7:30 p.m. offering hair styling and coloring, as well as “nails, lashes, waxing and piercing,” she said, adding that the staff sanitizes chairs and tools between each appointment.

Her staff has been busy, she said, noting, “We’re getting as many in as we can. We’re pretty booked for a couple of weeks.”

Heidi Hecker at R Illusions said her customers have been good about scheduling appointments and being patient, noting, “I usually work late hours anyway.”

Her salon is open Monday through Friday from 8:30 a.m. to 6 p.m. for hair cuts, styling and perms, plus coloring, perms, nail and pedicures. She also has a tanning bed. Every effort is being made to disinfect in between appointments, she said.

“We have wipes at every station, and we’re always cleaning tools,” she said.

Hecker said stylists and customers alike are wearing masks, adding, “It’s hard to work around them, but I’m doing the best I can.”

She said the shutdown was “a nice little break” but added, “I’m ready to be back.”

Gilbert is rarin’ to go at We Got the Look after a long layoff. She had missed the month of February after the death of her husband, Randy, and was just resuming work when the COVID-19 shutdown started. She is open 11 a.m. to 5 p.m. or later by appointment.

She is asking customers to wait outside and call when the arrive at the salon. She expects to be quite busy with color work (her specialty), cuts, perms, styling and highlights.

Massage therapist Amada Clavadetscher of Body, Mind and Soul Massage in Lovell said in a text that she is now able to resume her massage business on alternating Fridays. As an employee of North Big Horn Hospital she is working at home part of the time and at the hospital part-time. She said she will take every other Friday off “to get people in.”

Clavadetscher was unable to call with other details of her business under the new rules but has typically had just one customer at a time in her home even before the COVID-19 hit.