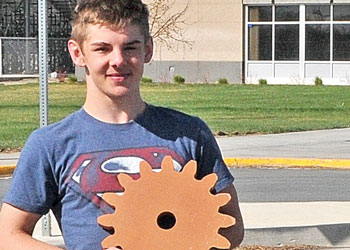 Innovation met need when students at Lovell High School helped Wyoming Lime Producers with a recent project. In appreciation, the company has donated a high-tech saw to the industrial arts program at LHS.

As the calendar turned to 2020, managers of the lime plant just north of Frannie knew they would need to fabricate some new gears for the plant’s kiln.

As the company put it in a statement, “Wyoming Lime Producers…has a kiln gear project coming up this spring. The project includes flopping the 16-foot diameter drive gear that rotates our kiln and installing a new pinion gear and pick-up oiler. In the past, WLP used a standard router to cut these gears out, but this was not the most precise way of cutting out the gear oiler teeth. As we were planning what parts for this project would be needed, we started thinking of a better way to have these cut out.”

Plant supt. Justin Bowers had recently toured the Lovell High industrial arts classrooms and was told of the capability of the computerized router at the school. An idea was born.

“It dawned on us that the school has a great setup in their shop, and we thought, ‘What a great way to get the kids involved with this project.’ We called the school and pitched the idea to (teacher) Bret George, and he thought this was a great opportunity for his class to get involved in a project that was part of an industry,” the statement continued.

“We received a call from Justin in January, and we were more than willing to help out,” George said. “Justin brought a template of how they used to cut it out by hand.”

LHS has what Bowers and plant manager Scott Allred call “an amazing computerized router” with the capability of cutting the one-inch sprockets out of “extra hard” garolite material – a fine-weave fabric reinforced block sometimes referred to as industrial laminate, phenolic and Bakelite.

The school’s most recent AutoCAD CRV file had the ability to fabricate the sprockets, and George and the students worked to modify the settings for the thickness of the material and the speed of the spindle, George said. They verified the process with wood first, he said, adding, “It took a leap of faith with this material.”

George said it took 14 passes by the router to make each sprocket.

“We could not run that kiln without these kind of gears,” Allred said. “We’ve run the kiln for 27 years, and this is our third change. We used to have to cut them by hand with a hand router.”

“Kudos to the kids,” George said. “They had to set up all of the parameters and settings for this material.”

The project was completed, and Wyoming Lime Producers was grateful. That led to the donation.

“Because of the help from the school in supplying WLP with a much needed service, we thought we would like to give something back to them,” the company statement said. “After visiting with Mr. George, it was decided that the students would benefit from WLP providing a new saw for the shop that is equipped with a guide rail for making long cuts. We encouraged the students to come and tour (the lime plant) to see their project in use at a working lime kiln.”

“This fall we hope to bring the shop class to the plant to see it in operation,” Allred agreed.

During a presentation Wednesday morning, April 29, George said he was thrilled with the donation.

“It can cut a sheet of plywood 55 inches long with a straight edge,” he said. “That’s a much safer procedure.”